On Saturday, October 22, 2016, Webb Paranormal Group assisted another local paranormal group, Rip Investigations, in researching and investigating the rumors told over the last 200 years about the Dancing Ghost of William “Grancer or Grand Sir” Harrison in the Harrison Cemetery in Kinston, Alabama.

The cemetery is located in Kinston, AL on what was once the old home place of William Harrison who was affectionally called respectfully “Grand Sir”. Mr. Harrison was a prominent businessman and cotton farmer/planter in the early 1800s. He was married to Nancy Justice Harrison who lies next to him in the cemetery. The Harrison’s had ten children.

Grancer Harrison was well known in the Kinston area for his horse races, Barbeques, and dances in a Dance Hall he had built primarily for his plantation. When he realized that his time was near to end, he began planning for his burial. His last wishes before he died was for his family to bury him dressed in his dancing clothes, clogging shoes, his fiddle in his hand while lying on his feather bed. He also wanted the dance parties to go on after he had departed this world. His tomb was to be located within earshot of his dance hall. 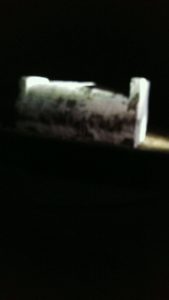 Rumor has it that on a Saturday night during the midnight hour people can still hear the fiddle playing and a deep male voice call the dance out. Some have even reported to seeing the ghostly figure dancing and hearing the tapping of his shoes as he dances along.

Another rumor was that he had slaves bury pots of gold near the dance hall or the grave. Vandals have tried and tried to find this but only succeeded in finding empty pots. One occasion the vandals blew up the tomb scattering Grancer Harrison’s bone fragments.

Now are you wondering what the two paranormal research groups found? Some very interesting events happened while we were there.

Around midnight, we decided to play some Scottish Fiddle music. What happened next was astounding. The K2 meters owned by both groups went off to the beat of the music. Then our cameraman, Chris Woods, noticed a strange light bouncing back and forth along the tomb itself. The cameraperson for RIP Investigations also moved in to get a clear shot of this phenomenon. There was an orb caught jumping from the side of the tomb too. When the music stopped then, the light stopped, when we changed the music to something slow the light slowed down, and when the music was fast, the light speeded up.

Watch the video to judge for yourself. Is this the Ghost of William “Grancer/ Grand Sir” Harrison dancing to the fiddle music he loved so much?