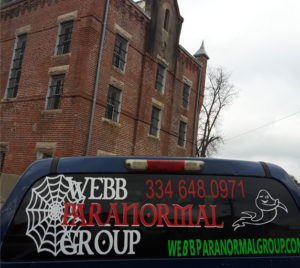 Pauly Jail is one of the oldest established correctional facilities in the state of #Alabama, the #Bullock County Jail, was erected in 1897. It was utilized as a film set in 2004.

The three-story red brick Victorian Gothic style of building is almost square in its design plan. Cement covers the foundation and the lower courses of the brick. The finished wall with rough masonry stone lintels located over the door and windows give the building a castle-like facade featuring four small projecting square brick turrets with witch’s hats (spiked metal caps) at the corners. The building has a metal-hipped roof.

A single door is the entrance on the ground level which leads to the women’s area and the jailer’s office. Also you will find what is left of a kitchen that was add later to the old jail so the inmates could have hot meals.

On the second floor is the bullpen, where the inmates shared a metal table and benches that served as their eating quarters. To the right of the table was a commode and an open shower for bathing.

On the third level, a trap door is set in the floor. The door, which could be opened by pushing a lever, could have been used for hanging condemned prisoners in the early 1900s.

It sits behind the 1871 Second Empire Style Bullock County Courthouse, adjacent to a beautiful landscaped park and gazebo. In 2000, a restoration of the jail was undertaken but funds soon ran out before it was completed.

The #Pauly Jail Building and Manufacturing Company was founded in 1856 by Mr. P. J. Pauly, a German-American born in 1832. The company was incorporated in St. Louis, Missouri, in 1885 and is the predecessor of the corporation as it presently exists. The company was the first to succeed after discovering the advantages of steel jail construction. #Pauly Jail in Union Springs

Watch this video to learn more about our Pauly Jail in #Union Springs in Bullock County, Alabama investigation that took place in November of 2016.