by #Mary J. Quirion of the WEBB Paranormal Group 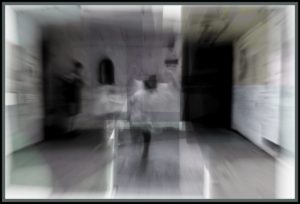 Over and over again, we hear of hauntings by the spirit of a little girl or boy.  Perhaps it’s the fact that a child represents innocence and goodness that disarms us from fear or apprehension. We let down our guard, thus exposing ourselves up to a spiritual battle for which we are unprepared. We make ourselves vulnerable to a spiritual world to where earthly rules do not apply.  I would like to examine a few aspects of child #spirits combining both my spiritual beliefs and personal experience in investigations involving “them.”

My personal belief is that there is no such thing as earthbound deceased children, even despite tragic and traumatic deaths. As a Christian, I base this on my spiritual beliefs and the character and nature of #Christ.  It is not my intention to impose my personal #religious beliefs on anyone else. Rather, I am merely illustrating and explaining my thought process. As a Christian, I cannot accept that Jesus would leave a child alone and lost to “haunt” a location; let alone seek sympathy and compassion from living human strangers.  It is illustrated in Matthew 13:14-15 where Jesus blessed the children:

There are other spirits who may choose to remain earthbound for fear of judgment. According to Judaism, children are unaccountable for their actions until they come of age. Typically, this occurs following a religious ceremony when a girl becomes a Bat Mitzvah at age 12 and a boy becomes Bar Mitzvah at 13. He or she is now considered an adult in the eyes of God.

If the “spiritual” aspect of this concept is removed,it is still a formidable argument.  Let us consider strictly appealing to human compassion. Who, in the depths of their heart and soul, could not help but feel sympathy for a young child, living or dead? This emotional response is compounded by what those of us who are parents and grandparents feel. From this perspective, I feel the strongest empathy and compassion; a maternal instinct.  Who would not issue an invitation for this ghost child to stay? That is all the demonic require to get permission to turn your life into a literal living hell.

The demonic cannot gain a stronghold without permission to do so. It doesn’t matter if we’re aware  that we just rolled out that welcome mat. Demons are opportunistic, cunning and know how to play this game.. They come to steal, kill, destroy and deceive as many as they can.  A demonic spirit can change in the blink of an eye from appearing to be a sweet, innocent child rolling a ball across the floor to an evil and unclean entity in a battle for your mortality and soul.  One is left wondering if anyone saw such a disaster coming.

There have been many documented cases of #child ghosts turning demonic.  I wish to speak from personal experience with regard to a case that my team and I were called in on.  At the time, I was a sensitive medium. I was able to communicate with spirits and discern the nature of hauntings as in positive or negative.  This case hailed from Hamden, Connecticut, a blue-collar town. Let us call this client “Judy” to protect her identity. Our team, SPI, was called in after things became really bad. By “really bad”, I am referring to Judy being scratched and pushed, inexplicable foul smells, the presence of dark, shadowy figures and full body apparitions, electronic disturbances, and lights malfunctioning.  Judy started doing her own EVP sessions while drinking and cursing at the entity. This was one of the worst cases I had ever seen and from the moment I set foot in Judy’s house, I knew not only that the spirit was demonic, but also that there were more than one of them. One of the demons threatened me and a year or so later, it made good on those threats and nearly destroyed my life and soul. In fact, Ryan Buell from Paranormal State and Lorraine Warren were also involved with this case. However, Judy refused to give permission to air or disclose anything about what happened.

So, why have I gone into such detail on this particular case? It all started with Judy seeing the spirit of a little boy who appearing to be about seven or eight years old.  She loved having him around and invited him to stay with her. Bam! An invitation issued. This “little boy” told her he would show her his grave and she should go to the cemetery with a spirit/Ouija board and he would communicate with her. Naturally, Judy wanted to know all she could about the so-called little boy, so she went to the cemetery with her best friend and the board.  That’s when all the dynamics changed.

There have been many, many cases with a child spirit tugging at a person’s heartstrings. I ask you to keep an open mind and to proceed cautiously when empathy and compassion overshadow the fact that it may be more of a sinister plan than a call of innocence.

Join us on Wiregrass Haunts Thursday evenings 7:00 CST and 8:00 EST on  WEBB Radio Network to challenge your minds and spirits via the paranormal. Tune in on Spreaker!