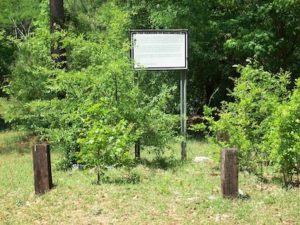 Perhaps the most haunting bit of Newton’s history was a tragic and brutal death that took place months prior to the battle of Newton; the death of William “Bill” Sketoe. The exact circumstances of Sketoe’s death are unknown. What is known is that Bill Sketoe was a Methodist minister. He was captured in December of 1864. Some believe that Sketoe was a deserter. Others even go so far as to suggest he was secretly aiding Union forces. However, these charges are largely disputed and, with the passing of time, have been largely dismissed altogether. What is believed is that Sketoe may have hired a mercenary to fight in his place so that he could return home to care for his ailing wife, who was dying of a terminal illness.

Nevertheless, Sketoe was captured by a mob and sentenced to death. He was to be killed by hanging, after being severely beaten, brutalized and humiliated by his tormentors. Sketoe was lynched and captured as he crossed a wooden bridge over the Choctawhatchee River in December by the rogue militia. Sketoe’s method of execution was to be death by hanging; a rope was slung over a tree branch with a noose fashioned at the end. Asked if he had any last words, Sketoe began to pray – not for his own life, but for God to have mercy on his executioners. This only further enraged the militia. Sketoe sat on a horse with the rope around his neck as he prayed. The militia, incredulous by Sketoe’s act of prayer, whipped the horse, causing Sketoe’s body to drop.

In a gruesome turn of events, the militia had misjudged Sketoe’s large frame. His feet were able to touch the ground. Though he was struggling to breathe, Sketoe was nowhere near death; his neck unbroken. As such, the militia dug a shallow hole under Sketoe’s feet. Eventually, the hole reached sufficient depth, and, after several minutes of anguish, Sketoe finally died, suffering a slow, painful, cruel death.

After removing Sketoe’s corpse, the militia attempted to fill the hole with dirt and debris. To their horror, the following day, the hole was discovered to be empty again. It was unknown who might have dug out the hole. Several more attempts were made to fill the hole, only for it to be discovered completely empty again, sometimes within hours. This inexplicable phenomenon lasted for over 125 years. No logical or scientific theories have ever been able to explain the unfillable hole. Ultimately, all theories lead to the paranormal; an inability to cover up a gruesome episode in American history. An unjust, torturous death of an innocent, good man, that we cannot bury or hide. Instead, Sketoe’s hole serves as a constant, permanent reminder of man’s capacity for cruelty against man; an ominous warning to never let an incident like this happen again. Unfortunately, there have been many other acts of cruelty, torture, and murder throughout the United States since the lonely death of Bill Sketoe in 1864. Perhaps until we learn the importance of mercy, justice, and compassion, the hole will never be filled.