Discrepancies of the Evidence at Pauly Jail 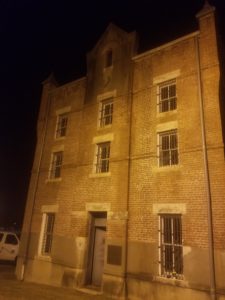 What mystery involves previous the inmates of the infamous Pauly Jail aka Bullock County Jail Museum in Union Springs, #Alabama? Do they linger on there?

Discrepancies of the Evidence

With two inmates that are rumored to have been executed in the jail, I would like to offer something for the reader to think about when reading over the evidence that is presented by others in their investigations of the old jailhouse.

“One of the oldest surviving jails in the state, the Pauly Jail, was erected in 1897 and used, as a film set in 2004, is a three-story red brick structure.”

Many have reported seeing or finding evidence of a Pauline McCoy at Pauly Jail.

Pauline was convicted of the murder of a young woman of 14 years old and accused of doing this over a coat.

How can this be when she was hung in 1888, which is 9 years before the erection of Pauly Jail?

This is my source:

The Daily Picayune had supplied a scanty few additional details from Pauline’s supposed jailhouse confession a few weeks before (September 5, 1888)

Also, you will find this statement on the website for Union Springs:

“The Bullock County Jail of 1897 replaced the jail of 1868, which stood on West Hardaway Street”

Aberdeen Johnson is another of the inmates of Pauly Jail that met his death but was it at the jail or somewhere else? He is also said to use the name Walker too.

#Webb Paranormal Group has some doubt after being at the jail for the last two seasons searching for evidence and many trips to the libraries.

Let’s look at the discrepancies of the evidence below.

A shot rang out as the mob marched along half a mile south of town and it was found that a young man has wounded the #negro in the right hip with a double-barrel derringer. He managed, however, to keep moving and was marched on for over two miles. A halt was made at the railroad track and a discussion had as to whether to take the black criminal on to the scene of his crime, where the object of his lust could see him, or whether to hang him at once.

The negro was getting weak from the wound and there was a rumor that soldiers were on a special train sent out from Montgomery, so it was decided to hang him to a tree on the outside of the road.

A dozen men took Johnson to the tree.

Then an old man, probably 65 years old, climbed the tree and hauled away on the rope which was soon made fast. The order was given for everyone who wished to take a shot at the negro to line up and when the old man got out of the tree probably 150 shots were fired into his body.

As far as can be learned the negro did not confess.

This newspaper article states he was marched “along half a mile south of town” One mile is 5280 feet divided by half is 2640 feet.

I do not see how he was hanged in the cemetery. He is not even buried in this cemetery either. He is buried in Beat 3. I am not sure where it is but it is not in the old City Cemetery just a few feet over from Pauly Jail.

There have been many tales over the years of the happenings at the infamous Pauly Jail. It is our duty to search for the truth and report the evidence that we each find ourselves. We do not rely on the rumors of others.

Webb Paranormal Group seeks to go beyond just listening to rumors by performing in-depth research using many techniques. Good research is just the beginning of dispelling such Discrepancies of the Evidence.