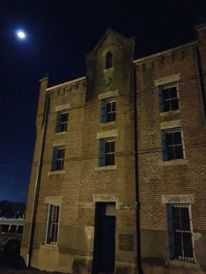 Webb #Paranormal Group’s Pauly Jail Live #Ghost Hunt was held at the Pauly Jail aka #Bullock County Jail Museum is located in #Union Springs, AL. It is a Gothic Style Red Brick building with three stories. The women inmates were held on the first floor, while the second and third floor was reserved for men. The third floor was designated for the more hardened criminals such as murderers and rapists. The trapped door with the pulley with which the rope was attached too was the gallows where executions could be performed on the third floor. The jail’s inside walls and bars of the cells where all painted black. This just added to the gloominess that already existed. There was no air conditioning for the inmates during the hot #Alabama summers. Inmates were often stacked into the cells like sardines with 10-12 people in the cells that are approximately 8 ft. x 8 ft. Imagine the heat, sweat, and misery of being stuck in the cage painted black. The stench had to be horrific. The inmates could drink from the sink to help cool off a bit but most cells didn’t have a toilet or sink in it. The privilege of getting to go outside in the courtyard for some fresh air must have been exhilarating. 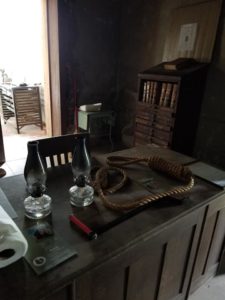 Webb Paranormal Group hosted a public Ghost Hunt on the evening of Saturday, October 20, 2018, at Pauly Jail in Union Springs, Alabama. Our guest on the hunt started arriving around 5 P.M. and was anxious once seeing the looming Pauly Jail. Shortly afterward, Teresa Fikes gave them a tour of the infamous Pauly Jail and the Old City Cemetery along with a short stroll downtown. This gave the guest a little historical information to help aid in the investigation that was later to come. Once the tour was down, refreshments were offered by Webb Paranormal Group members while Stan Fikes, WPG Director/lead investigator went over the protocols of investigating. Shajuana Coleman, Team Training Manager, was set up with an equipment table for the guest to check out the piece of equipment they wanted to use during the investigation. When the guest was finished with their investigation they would return the equipment to Shajuana, who marked it as returned. Then armored with a new view of things, and some really awesome equipment, the actual ghost hunt began. 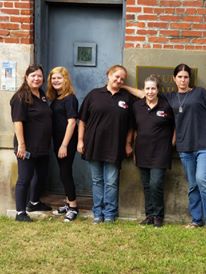 After the live Ghost Hunt was over with, the WPG team and guest enjoyed a Chili Dog supper. Each member contributed something to the feast. Vera Haney kept us supplied with Coffee, a much-welcomed drink in the business. This much-needed break gave the team time to rest and refresh body and mind. It also gave the Haints time to rest too.

After all the public guest had left for the night; it was time to get down to some real investigating. Webb Paranormal Group along with RIP from Enterprise, Alabama and Blaine Rohan from Wetumpka, Alabama joined forces to discover the secrets of Pauly Jail aka Bullock County Jail Museum. Out came the DVR, Special Rigs with Cameras, meters, drones, and digital recorders. Even some old school tape recorders were brought out. A Jacob’s Ladder was there as well, just to add some flair to the scenes.

Special Guests, James and Dona Brooks, joined everyone that night for some very informative #research of the old Haint. Mr. James Brooks was the grandson of J.W. Mann, a former inmate that died in the jail on the second floor. Mr. Mann was killed when a cigarette he lit caught the mattress in his cell on fire. He died of smoke inhalation on Christmas Eve 1960. He is just one of the ghost of Pauly Jail that we encountered. It is firmly believed he had a message for his grandson.

There were quite a few #anomalies that were experienced that night, some explainable some not. Make sure to catch our next post to find out what the results of the investigation were.