WEBB Guest: David Oman – a Life Steeped in the Paranormal 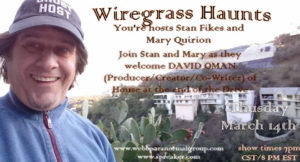 On March 14, WEBB’s own Stan Fikes had the pleasure of interviewing author, producer and creator #David Oman. Oman has been fascinated with the #paranormal since he was a child. Oman’s name has been well-known among the paranormal investigative community for years. Oman caught the public’s eye in 1999 when he, accompanied by this father, constructed a house on Cielo Drive in Los Angeles. Yes, that Cielo Drive, where the infamous Manson family murders took place. To find out more about Oman’s home on the street where #Sharon Tate and her guests were brutally murdered, be sure to visit http://theomanhouse.com.

The Many Hats Worn by David Oman

Oman wears many hats and has had a rather eclectic career, including working as a private investigator for 12 years. He experimented with videos and has an adventurous, entrepreneurial spirit, resulting in various projects and creative endeavors. To this day, he continues to use video as a medium of recording his strange encounters on Cielo Drive.

Oman has become somewhat of a household name among paranormal investigative communities. He has also appeared on numerous popular paranormal reality shows. Last, but certainly not least, Oman has been a featured guest on multiple mainstream news and TV segments, not to mention the iconic Coast to Coast.

Oman’s led a life that can only be described as fascinating, unusual, bizarre and captivating. Be sure to listen to Stan’s interview with David Oman to hear some of Oman’s most bizarre, chilling and amazing tales of growing up in a world steeped with paranormal activity. Be sure to check out Oman’s other popular website, devoted to the DeWitt murders.

Ominously, Oman writes the following of the DeWitt murders:

“None of the more recent developments in forensic science have allowed for any breaks in the case, and as the file has remained opened on the DeWitt murder spree, modern-day detectives still attempt to piece together the unsolved events of that night.

This site is a testament to the events of that night and to the memory of the four beautiful lives that were lost at the hands of a dangerous culprit that remains at large.”

Listen to the full interview here, courtesy of Spreaker.